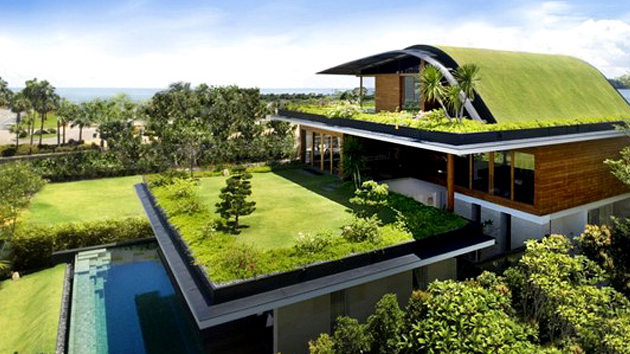 As climate concerns become more frequent, there is an increasingly common pursuit among residents to reduce their carbon footprints at home. In addition to being environmentally motivated, there is also a call for money to be saved, which tends to occur in tandem when energy consumption is reduced in living spaces.

This has led to a significant change in the way homes are designed and, instead of sparsity and minimalism, that which has occupied the focus of many interior designers for some years, there is now an essential focus on how to make a living space more sustainable. So, if you’re ready to reduce your carbon footprint, redesign your living space, and contribute to an improved local environment, then we have four of the best ways you can do that.

Solar panels have long been met with resistance, with rumours of their cost and inefficiency. However, these conceptions are less likely to be believed as solar panels grow in popularity, with a greater number of homeowners discovering how beneficial they are to a property.

In addition to the significant carbon reduction they offer to residents, they can reduce energy bills by a surprising amount, helping homeowners to quickly make a return on their initial investment. What’s more, as batteries become more affordable, even greater costs are being saved on utility bills.

Homes with gardens are no longer conforming to the regimented designs of previous decades and are now shunning neat lawns and tidy flowerbeds, instead, celebrating the ecologically wild. From the celebration of wildflowers and weeds to the conversion of sheds into log cabins, gardens are no longer being prioritised as an enclosed space, with priority being placed on how they can benefit not only residents but local wildlife and flora too.

Food waste is one of the biggest contributors to a carbon footprint and, within the UK, nearly a third of all food produced is ultimately wasted, costing the economy billions of pounds and the environment a huge carbon footprint. Homeowners can do their part by establishing compost systems, ensuring that every last scrap of food is used in some way, even if it is simply returned to the soil.

Such systems are easy to establish at home, require minimal upkeep, and can even support the gardens of you and your friends with a healthy amount of compost.

Instead of buying flatpack furniture, that which has been manufactured on an industrial scale and generally has a substantial carbon footprint associated with transportation, a great deal of carbon can be saved in the home by, instead, sourcing locally made items of furniture, those also produced with environmentally friendly materials.

Such items, as well as a culture of upholstery and upcycling, are becoming more common in living spaces and, as a result, interior design trends are slowly moving toward organic aesthetics, with a celebration of locality and raw designs, those made from timber, stone, and even cork.

Mistakes To Avoid While Going For Scandinavian Interior Design

How Ducted Heating Systems Work, What They Are and How to…

How Ducted Heating Systems Work, What They Are and How…

Mistakes To Avoid When Hiring A Heating…

Diy Projects You’re Most Likely To…

4 Fundamental Qualities Of A Sustainable…